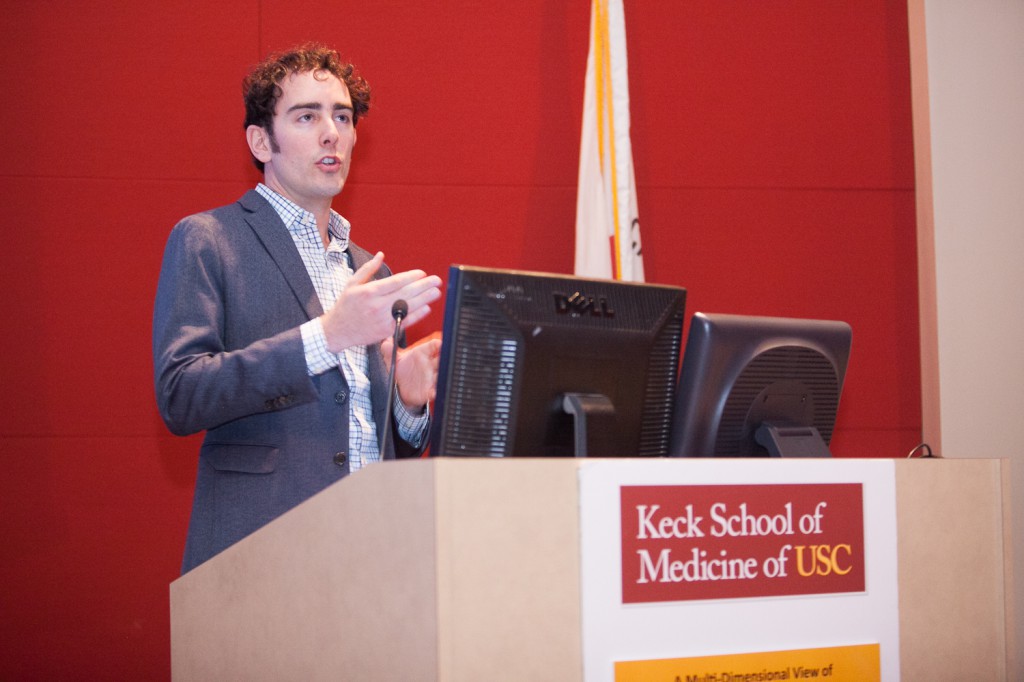 Chris is a PhD student with the Keck Department of Preventive Medicine in his third year of the Health Behavior Research Program. He is a USC Provost’s Predoctoral Fellow and recent recipient of a NRSA F31 award from the National Institute of Environmental Health Sciences.

Chris’ background is in cognitive neuroscience and developmental psychology. As a doctoral student he has explored the neurocognitive factors that influence a child’s ability to engage in goal-directed behaviors relating to health. He focuses specifically on executive function. Executive function forms a key part of the mechanism that allows an individual to say “no” to unhealthy options in service of a long-term goal. An example would be the ability to forgo having a calorie-laden dessert in an effort to achieve a weight-loss goal. He is particularly interested in knowing to what degree near-roadway pollution may affect the development of executive function in children. Near-roadway air pollution is loosely defined as the pollution from vehicle traffic including tailpipe emissions, partially combusted fuel, and debris from tires and brakes. The NIH, which funds most biomedical research, was particularly interested in Chris’ research because most of the current attention in the field is directed towards regional air pollution (smog, power plants, etc.) and the effects of exposure to pollutants early in life. Focusing on the effects of near-roadway air pollution on behavioral outcomes during adolescence is what sets Chris’ research apart from the rest.

Two summers ago, Chris participated in the USC Graduate School’s Academic Professional Development program, which ran for ten weeks. In this doctoral summer institute, students from across the university gathered once a week to attend workshops on grant writing and manuscript writing.

Forcing yourself to explain your research to someone who isn’t well-versed in it is valuable because you’re communicating and translating the research to concepts that everyone can understand. That was the value of the summer institute – there were people from all around USC and it’s great to have any opportunity to bring people from various disciplines together and learn from one another – Chris Warren

Chris also credits the Provost Fellowship as instrumental to his capability of putting forth a competitive application for the NIH F31 Fellowship. Due to the fact that he wasn’t a TA, it freed up an additional 15-20 hours per week where he could pursue his own research ideas.

As a graduate student, you need to take advantage of the fact that you’re in this incredible community of scholars and put yourself out there, otherwise your focus may narrow too much  – Chris Warren

“For instance, within the Health Behavior Research Division there’s little focus on air pollution; they’re looking more at other determinants of health. But within the broader department of Preventive Medicine there are many people who are interested in that topic and the health effects of environmental exposures more broadly. Seeking people outside of my division is what led me to make these links in my own research. Had I not put myself out there and attended talks on topics different from my own, and taken additional classes taught by professors from other disciplines, I wouldn’t have made these connections. There’s a tendency to want to focus on one area and be the expert, which is important, but as a graduate student you need a variety of perspectives,” said Chris.